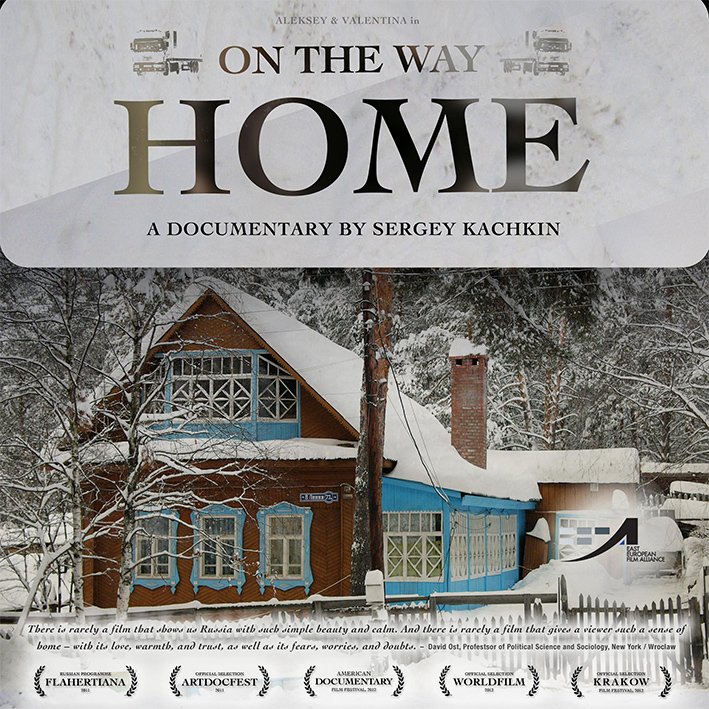 «For over twenty years Alexey has been driving his lorry across the length and breadth of Russia. As a long-distance driver, Alexey is often away from his home and his wife for long periods of time. This seemingly mundane and common story makes the basis of Sergey Kachkin’s 2011 documentary film On the Way Home (Po doroge domoi).

The film is split between Alexey working in his lorry and his wife at their small house in central Russia. She worries constantly about the risk of an accident or hijacking. On the road, Alexey’s stories and the banter over the radio with fellow lorry drivers provide a telling portrait of contemporary Russia; one of decay, corruption, underinvestment and a complete lack faith in those that run the country. At home, those greater problems are absent, focusing instead on the intimate relationship between Alexey and his wife, as well as their faithful old dog who is diagnosed with a fatal disease.

On the Way Home stays close to classical documentary technique and features plenty of cliches of Russia (the snow and the bathhouse both make an appearance). However, it also provides relevant and subtle insight into the very ordinary lives of those who don’t tend to make into onto the screen and thus reveals a great deal about Russia today.

Sergey Kachkin has been directing and producing documentary films since 2006. He received an East European Film Association grant to develop and finish On the Way Home and is currently working on Perm-36, a Territory of Freedom, a documentary about the museum of political repressions based at the Perm-36 Gulag in the Urals. »
https://www.calvertjournal.com/features/show/2260/on-the-way-home-film